There is something truly magical about Lindau, the home for the annual Nobel laureates meeting. It might be because you feel as though you’re on the set of a movie — the cobblestones in the quaint pavements are arrayed like small rainbows; everyone is eating gelato and, well, you’re on an island in the middle of a huge fresh water lake in Germany. There’s a surreal element to the experience. 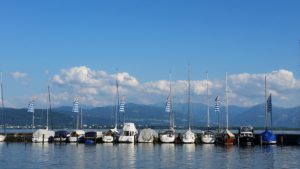 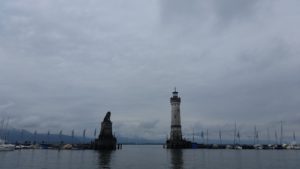 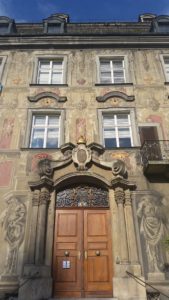 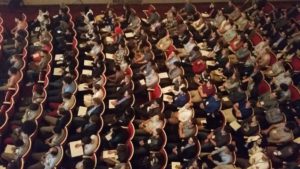 There was “work” (above) — sessions in which Nobel laureates spoke about their research, and then there was play (below). Meet (from the left) Luyanda, Sphumelele and Siyambonga. They were the best thing about the trip. This was when we went to Austria for the evening. As one does. 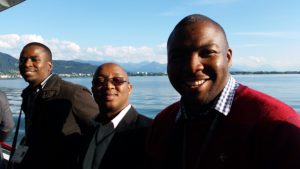 Many people were the victims of my “lang arm” photography technique (in South Africa, we’ve been doing the group selfie for ages. We call it the “lang arm” – Afrikaans for “long arm”.)

No one was safe … 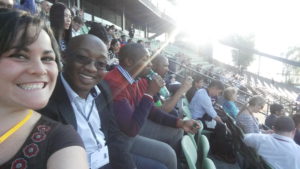 Sphumelele Ndlovu, UKZN PhD candidate and all around ninja … 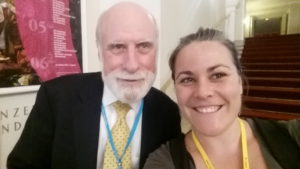 Vinton Cerf, one of the fathers of the internet and a man who destroyed productivity forever … 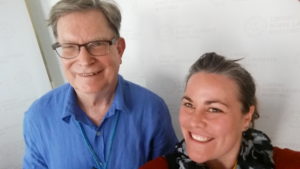 On the final day, they took us to another island, Mainau Island. And a castle. I felt a bit like Alice in Wonderland. 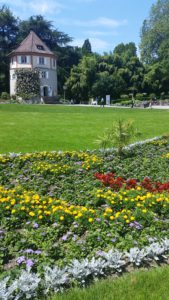 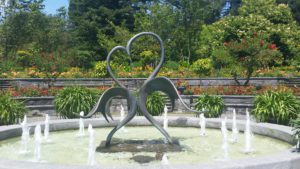 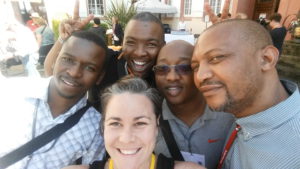 The question on the lips of participants of the Lindau Nobel Laureate Meeting was not if the detectors of gravitational waves would win a nobel prize for their work. It was a matter of when. The Nobel prize for physics will be announced within the next 100 days.

On 11 February this year, scientists from the LIGO collaboration announced that they have detected gravitational waves. This was followed up by a second detection last month. The waves were caused by giant black holes merging in events that took place more than a billion years ago.

Gravitational waves are distortions in space and time that, rather than the force of gravity, explain the movement of planets, stars and galaxies. In his 1916 theory of General Relativity, Albert Einstein predicted the existence of these waves, linking space and time.

“It’s been 100 years [since Einstein predicted gravitational waves],” said Nobel prize winner George Smoot. “It was a long argument that went on for a long time: for the theory, it was 40 years of arguing [whether they exist], and then the experiments involved 60 years of arguing.”

Their detection “opens up a whole new era … a new branch of astronomy”, Smoot said on the sidelines of the Lindau meeting, which was dedicated to physics.

LIGO, which stands for Laser Interferometer Gravitational-wave Observatory, is a system of two detectors, one in Louisiana and the other in Washington.

Each detector involves two 4km tunnels that meet at right angles (like an L). A laser beam is split to run down the two tunnels, and is then reflected back and forth downt he tunnels. There is a detector where the two arms meet. If there are no gravitational waves, the laser beams cancel each other out at the detector, because the laser beams have both travelled the same distance. But if there is a ripple in space time, the distance travelled by the beams differs slightly, and this is picked up by the detector.

Think of two people on opposite sides of the equator who start walking towards the North Pole: they will meet eventually, not because there is a force pulling them together, but because the Earth is curved. The same idea applies to the rest of the universe: planets, stars and galaxies moves in certain ways because space itself is curved.

Although LIGO has been around since 2002, it only detected these gravitational waves after a multi-million dollar overhaul.

Smoot, who received his Nobel prize for the detection of the cosmic microwave radiation background, said that the next 20 years would involve improving detectors and observatories and creating new ones for “gravity wave astronomy”.

“Up to now, we’ve been deaf to gravitational waves, but now we can hear them,” David Reitze, LIGO executive director at the California Institute of Technology (Caltech), said at the announcement of the first detection in February. “We’ll hear things we expected to hear … But also things we never expected.”

“Mentorship is important in all fields, but it’s particularly important in science,” says Dr George Smoot. Ten years ago, Smoot won the Nobel prize for physics, after he discovered the cosmic microwave radiation background, the ancient radiation left over from the Big Bang.

Last week, he was one of 29 Nobel laureates who, along with about 400 postgraduate students from 80 different countries including 11 from South African, descended on the German town of Lindau. The Lindau Nobel Laureate Meeting, in its 66th year, aims to bring together Nobel laureates and young scientists to inspire and share knowledge, as well as form networks and collaborations.

“The really most important thing is to see people who are doing good science, and see what standards they have, how they check their work, how seriously they take it, and how they interact their colleagues,” Smoot says. “It’s like sportsmanship in sports. The real point is to develop societal skills on how do you actually operate in a world in which there are big commercial activities, where you’re competing, but you’re also collaborating. That’s very important stuff that you [learn] from having good mentors.”

The concept of mentorship, however, is not intrinsic to South Africa’s academic space – or industry, for that matter.

While Rosanne Diab, the executive officer of the Academy of Sciences of South Africa, agrees that mentorship is “absolutely critical to one’s success in a career”, “the whole idea of mentorship is not something that’s common in many of the disciplines, particularly humanities and social sciences”. While there are examples of good mentorship, the process is not formalised in South Africa’s universities.

“A mentor is like a supervisor who you look up to, but also a life coach … someone to help you through,” Diab says.

She points to the department of science and technology’s internship programme, which each year places unemployed science graduates into internships within the department’s agencies and units. “Many of these graduates have excellent academic qualifications, but are unable to find a job,” Diab says.

“If you explore further, you’ll find that they are lacking a network, a mentorship to help them and connect them, guide them through this process.

“It’s not their qualifications. It’s their network.”

The latest National Survey of Research and Experimental Development Survey, released in May, found black women accounted for 12% of researchers at universities in South Africa in 2013-14. Despite being the largest demographic group in the country, there were just more than 2,100 black women researchers in the humanities, social sciences and natural sciences. There were 18,212 researchers in the higher education sector in 2013-14.

Asked to comment on these statistics, Dr Nomalanga Mkhize, a history lecturer at Rhodes University, said last month that she attained her doctorate because she was supported by her then-head of department Prof Paul Maylam. “You have to actively take an interest in black women and help them through. Often black women don’t think that it is something they could go for…. I got my masters and my first teaching job because the head of department wanted to give me a chance,” Mkhize said. “He could see that the history department at Rhodes [University] was heading for retirement [because the professors were nearing retirement], so he got young people in.”

Thomas Ellerbeck, a member of the board of the Lindau Nobel Laureates Meeting, says: “The world is much more complex than it was 10 years ago,” he says. “Getting different views on your behaviour, on how you make decisions, it helps you to develop and grow. This is not only something for people in academia and universities. It’s also in business.

There is a point in young people’s lives or businesses when they have to make important decisions, and it is useful to have someone to advise them, he says.

“There are different types of mentorship. The most important thing is that there is interaction, that both are talking and challenging themselves. In a good interaction, both benefit from different perspectives, different ages, different life experiences,” Ellerbeck. “I think you should formalise it a little bit, though, otherwise it could be like a ‘coffee talk’.”

“It’s actually seeing how people do things, how they approach [problems[, how they figure out what kind of projects to work on, how they deal with the public,” he says. “Mentorship turns out to be extremely important.”

Ellerbeck says that he knows a number of people who say they “have to do” mentorship, as though it was an unpleasant task. “If you ‘have to do [it]’, then you shouldn’t do it,” he says. “You should really see this as a chance for both [sides] to grow.”

But it helps if the person being mentored has an idea what their concerns are, Ellerbeck says. “But, because I’m older and probably more experienced, I can be challenged with your questions. In the end, it must also help me.”